June 11, 2013 · by lynneflowergirl · in Centre for Health and Well Being, DukeEngage, Group Activities · 1 Comment

This story comes from last Tuesday, which means that I am only a week behind in posting about my adventures. =) There is some value in writing about things in retrospect though, don’t you think? I feel like it gives me more time to digest it and to look at it with a fresh perspective again. Then again, I am a horribly procrastinating person so I will try to be more diligent about posting! I promise! In my defence, there is a huge group of about 19 Americans that have been staying in the hostel recently and they have stolen all the internet. And hot water.

Cold showers aside, last Tuesday, I finalized the survey for my research project. I am looking into the feedback of those who have had regular therapies with our clinic and trying to gauge feedback, ways to improve our service, as well as what needs residents think the community has and how we can help address those needs. I made a google form for the survey so I can enter responses into an online form and they would be automatically sorted into a google excel document. Then began the fun part – the hunt for 100 clients to take the survey! Yipee!

I also sat in on a board meeting for the centre, which was extremely intense. Funding has been a big issue for all the organizations around the area, and it is incredibly hard for small organizations to keep their heads above the water. At one point the board discussed whether or not to keep a certain walk-in therapy session open since it costs enough to offer 10 one-on-one appointment therapies for clients during the week. Though turnout hasn’t been great, it did improve marginally when I called two two-inch binder worth of people to remind them the session existed.

One board member who had sat on the position for around nine years said, “Well I think it’s worth it.” She said, in a condescending manner, that the centre is all about helping people and even though only 8 people showed up it helped those eight people. (And mind you, that was a good week.) Then, she went on to accuse my boss of only thinking about things in a purely profit manner and said that the session should be kept until there was literally no funding left to spend.

And that was that. Two board members were completely useless and didn’t utter a word through the entire meeting. A third lady, who was quite nice, marked down for keeping the sessions and then proceeded the discussion along to another topic. I was shocked at first. Clearly a little more discussion was necessary on the topic. Nobody brought up the idea of maybe only keeping one free session open rather than having two; nobody said anything about the fact that ten people could be getting one on one, regular therapies with a therapist. The other intern and I were awkwardly positioned in the back of the room, so I didn’t feel like I could speak up; but to be honest, all evidence points to getting rid of the walk-in sessions.

On my way back from work, I saw some painters painting a mural. It was beautiful! Apparently it was for suicide awareness, and they were painting some beautiful sunflowers and waterfalls. A picture of it is in the gallery below. After work, the group went to the Duke of York pub to bid our program director goodbye. I couldn’t believe how fast time had flown by! I was quite sad because I didn’t want her to leave, but we all had a great time talking and she left early to get rest before her flight the next day.

We had then planned to go to a club, but the cab company that told one of us the wait would be 16 minutes actually didn’t show up at all. When we called 25 minutes later to inquire they told us that they did not have any cab that accommodated nine people and so they didn’t send any. That’s the last time we were ever going to use that cab company! By this time we just flagged down two other taxis and most people went home.

I went to McDonald’s with two guys in the group and got a strawberry and banana smoothie. Funny how McDonald’s is the only thing open since all the shops and things in this country close around 4 or 5 PM. I guess that’s the American influence at its best.

And that is one evening that did not go as planned. Stay tuned for some funny things I learned at work! 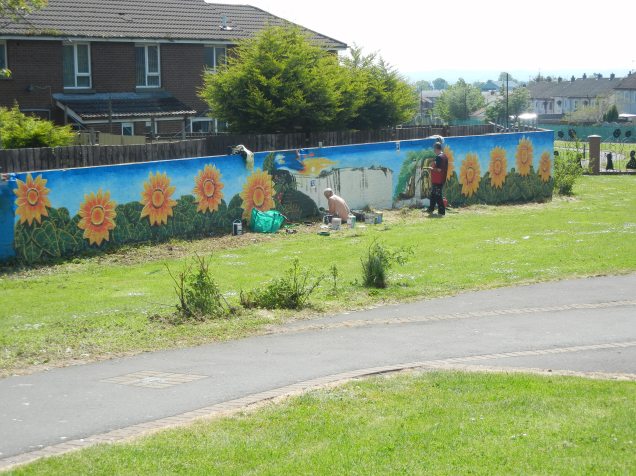 A beautiful mural for suicide awareness. I pass by this wall every day on my way to work.

← Yet another day at work. =)
Funny Happenings – Nonexistent Options, A Fake Real Baby, and Some Endearments →